Inter invites the Giallorossi to raise their stakes, the Azzurri have made it known that they can reach up to 60 million

MILAN – Another day full of facts and news. Certainly the summer soap opera linked to Mauro Icardi does not allow Nerazzurri fans and those of the other formations involved to get bored. And so yesterday, while the attacker and his whole family spent an afternoon on the boat (excursion on Lake Como: children enjoyed with a lot of orange life preservers; also the mother of Wanda Nara, Nora Colosimo), Rome, Napoli and in the shadows also Juventus worked to buy the Rosario bomber card.


Lukaku, Icardi and the 9 blown: the irony on social An intriguing intrigue that involves more and more actors (watch out for the moves of the PSG), however, with very distant positions and interests between them: the striker took a week to reflect and made it known that surely before mid-August no will decide nothing about its future; Inter expects the story to be closed in the shortest possible time and with a clear indication from the player on the team where he would prefer to go (conditional of obligation because in the Viale della Liberazione from the Argentine will not be accepted diktat especially if the formation chosen was Juve); the Napoli brought an important pressing and came to put on the table almost 60 million after it had started from a rating of 50; Rome is studying an offer that includes the Dzeko card with more money (not 30 million as initially hypothesized, but more); Juve, on the other hand, has the hope that Maurito will wait again to sell Dybala and thus have the millions needed to present a cash offer that Inter will hardly accept. Because the reports on the Turin-Milan axis are very tense and the bianconeri is the least appreciated destination for Marotta. Too bad it’s probably the number one on Icardi’s list. Otherwise what intrigue would be …


Also Icardi at work with Inter in Appiano 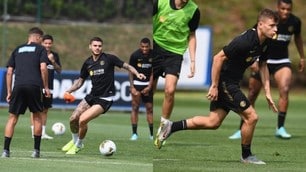