Herman and Marijke to Spagnoli District immortalized in a work of art dedicated to his son, top scorer at -time the club blue

Napoli – A must for parents Dries Mertens : Herman Mertens and Mrs Marijke have went to District Spanish , where a mural depicts Dries, dubbed “Ciro” by the Neapolitan fans. Just a few days ago, the Napoli striker had gone in person to the scene to affix his signature to the homage of blue supporters. Today, as reported by a photo of “Napoli Magazine”, the parents of the Belgian, but now Neapolitan adoption, pose smiling in front of the murals depicting the son together the fan Antonio “Bostik”, one of the founders of “Teste Matte.”


Mertens, handshake with De Laurentiis: photos of the signature 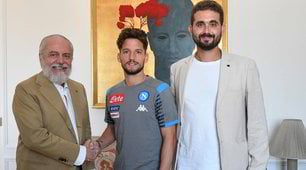